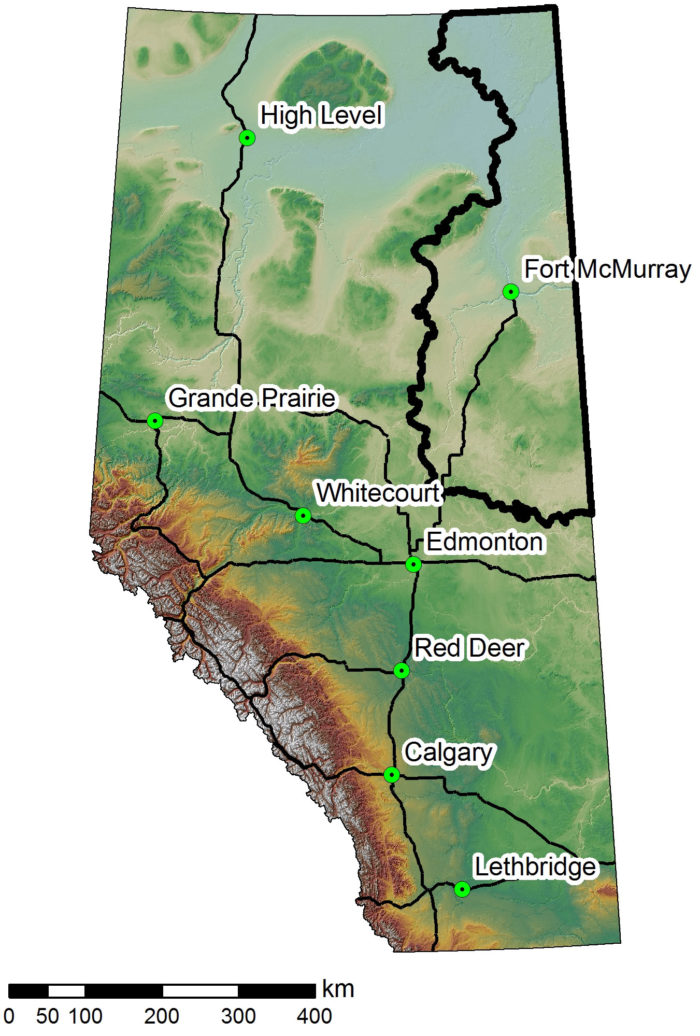 The Lower Athabasca watershed is oriented along a south-north axis, starting at the town of Athabasca, and extending to the Peace-Athabasca Delta; the Slave River watershed, formed from the Peace and Athabasca Rivers downstream of the delta, is also included in this region. Other than a few agricultural areas in the far south, the region is dominated by forest and also includes much of Alberta’s oil sands activities. This includes the Cold Lake oil sands region in the south, and the Athabasca oil sands further north, principally around the city of Fort McMurray. 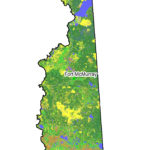 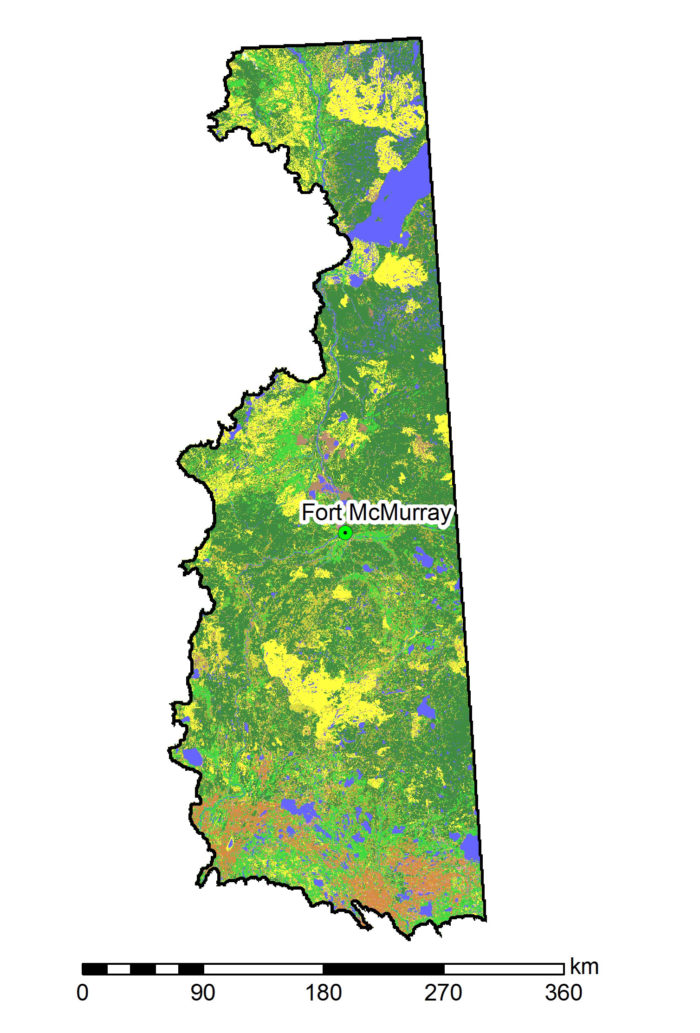 This map shows the major landcover categories present in the region, including both natural and human features. Detailed landcover maps are an integral component of all of our ecosystem service models. 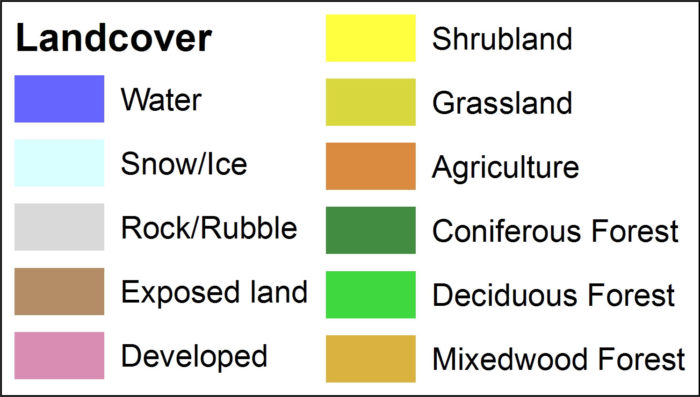 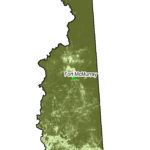 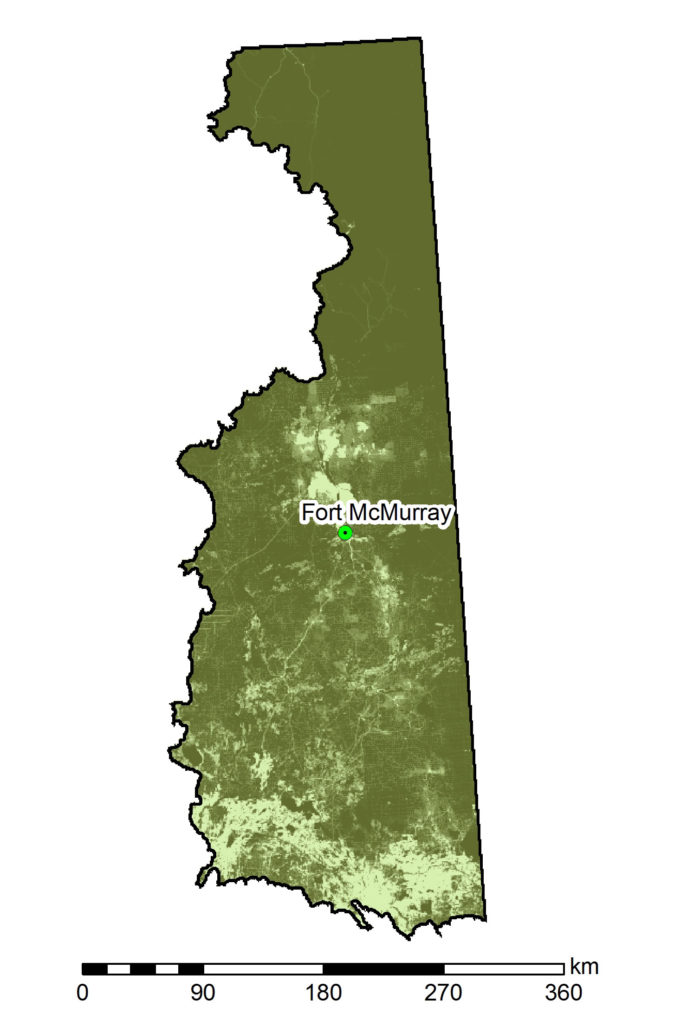 The ABMI’s Biodiversity Intactness Index predicts how the ecological community changes as a result of human land-use development, expressed as a percentage. A score of 100% represents an area in which the abundance of each species is exactly as expected if there was no human development present. Human development causes the numbers of some species to decrease, and causes others – such as magpies or coyotes – to become overabundant. Both responses represent a deviation from an intact community, so the index decreases in both scenarios. 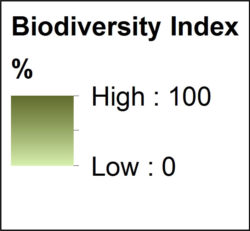 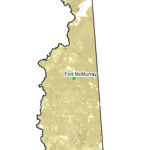 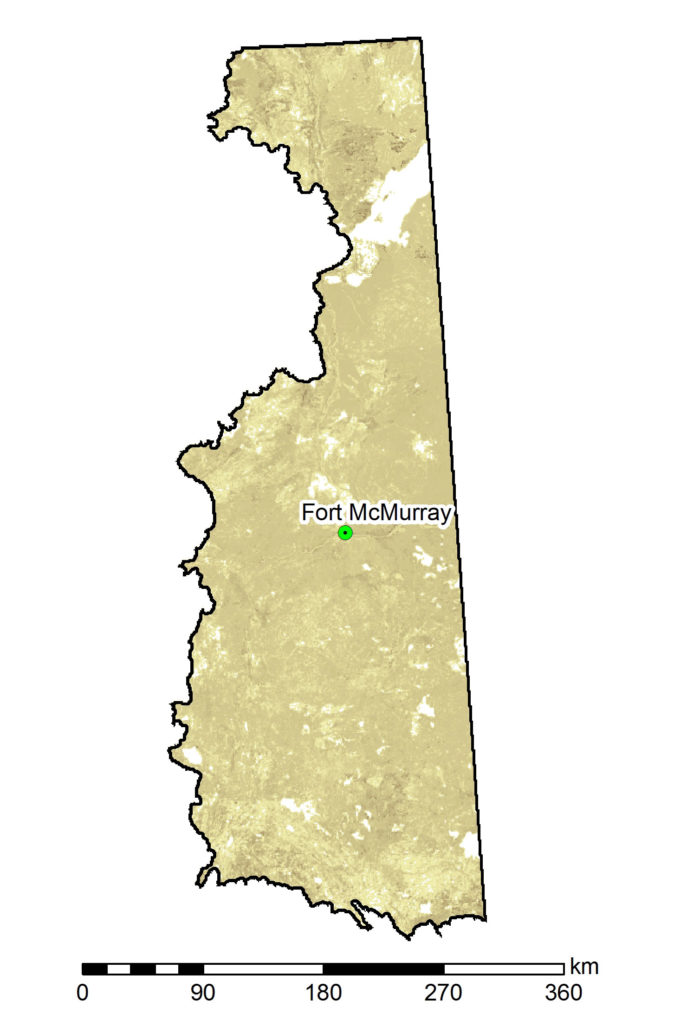 This map shows the distribution of carbon stored in forested areas, both above- and below-ground. Forests sequester carbon from the atmosphere at different rates based on their age and the forest type. While the amount of carbon stored in dynamic forest ecosystems will always be in flux, large quantities carbon may be quickly removed through major disturbances such as forest fires and timber harvest. In the case of fire, carbon is released directly to the atmosphere; in contrast, timber harvest releases some carbon, but much is also stored for a period of time in forest products such as houses, furniture, or paper. This map is a baseline for understanding potential future changes in carbon storage. 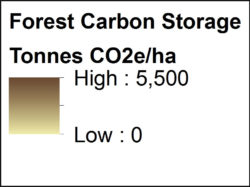 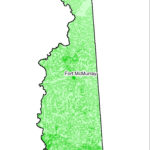 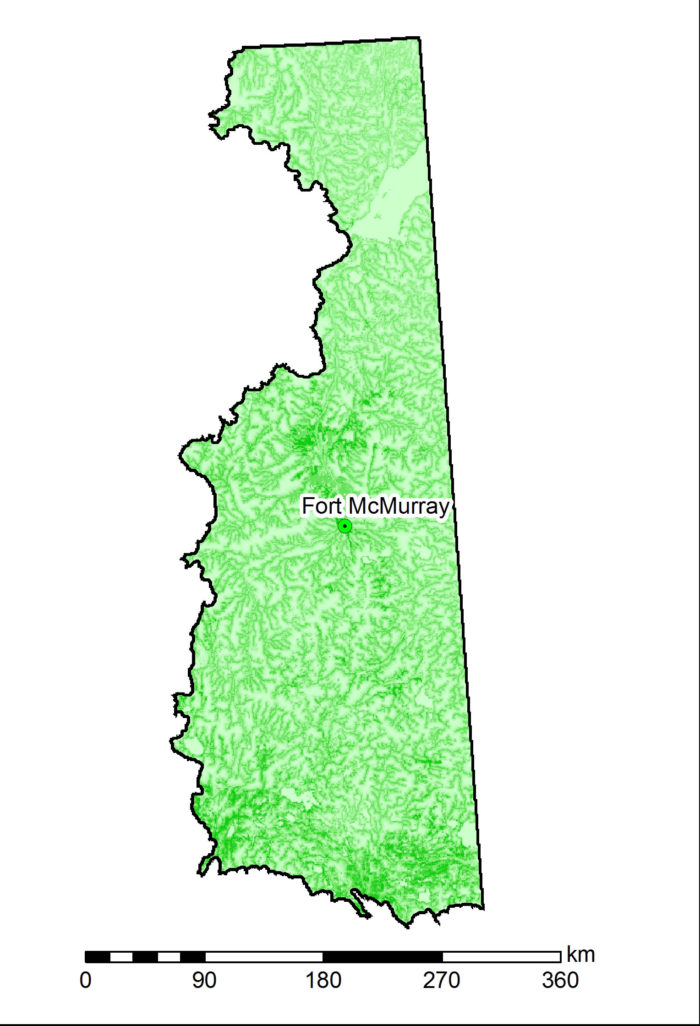 Phosphorus is a critical nutrient for life; however, too much of it in surface water can lead to environmental problems like blue-green algae blooms and winter fish kills in lakes. This map shows areas of the landscape that are sources of phosphorus that runs off into rivers and lakes, based on a model that simulates precipitation and overland water flow across Alberta in an average year. This type of export is called “non-point source” and it’s the dominant source of excess nutrients like phosphorus and nitrogen. Because this phosphorus doesn’t originate from a single, discrete location (“point source”), it’s much more difficult to manage. Linking landscapes to water quality is therefore critical for understanding and managing nutrient loads in our lakes and rivers. 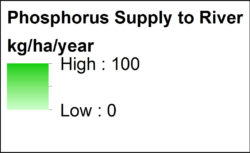 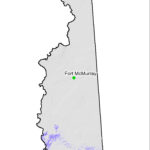 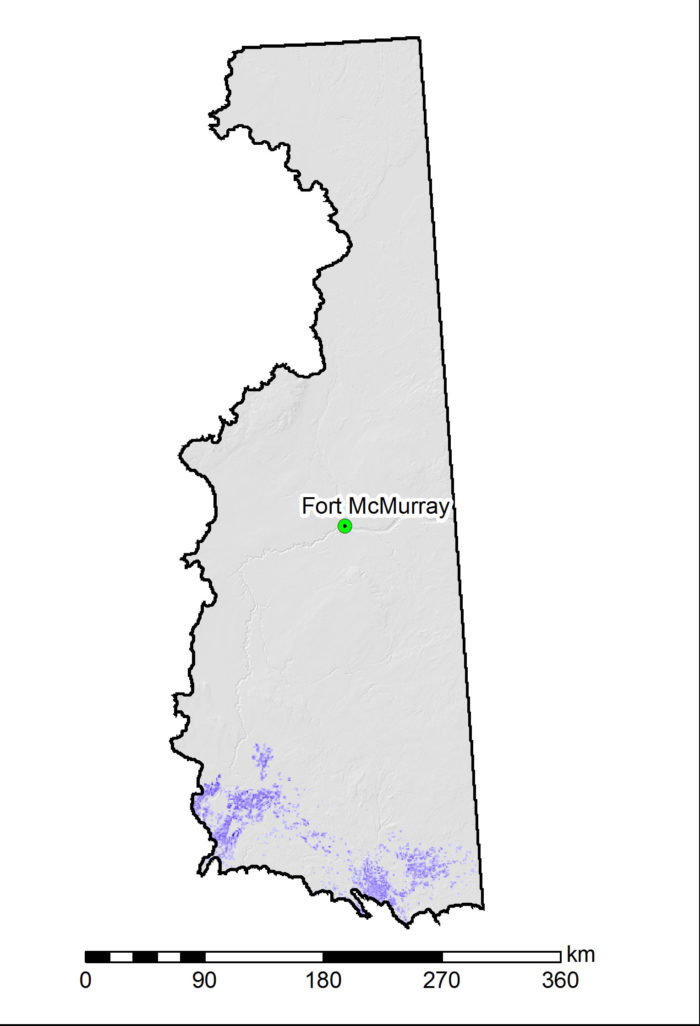 Wild pollinators such as native bees pollinate a number of crops in Alberta, perhaps none more importantly than canola. This map shows the monetary value of the pollinator community by estimating the increase in canola yield that can be attributed to pollinators. This model accounts for the amount of uncultivated land available as pollinator nesting habitat (most native bees nest in the ground), as well as how far these insects can fly from their nests during foraging trips. 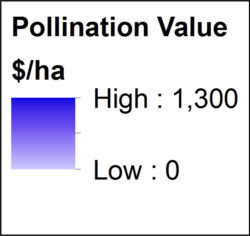 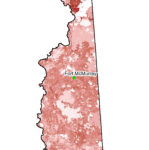 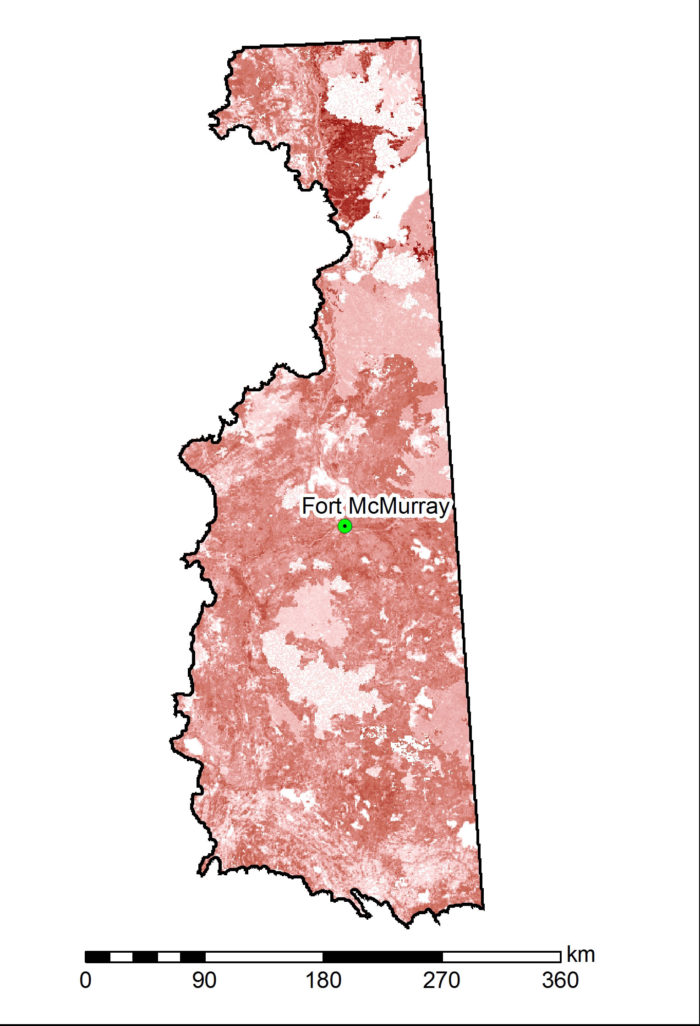 This map shows the total amount of standing timber present across the region. Forest stands grow and produce harvestable timber at predictable rates based on their age and stand types. This map is a baseline for assessing the value of timber, which can be done by accounting for the operational costs of timber harvest and milling activities, and the market values of wood products. 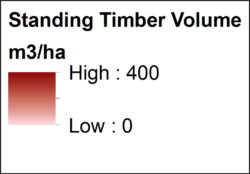 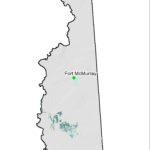 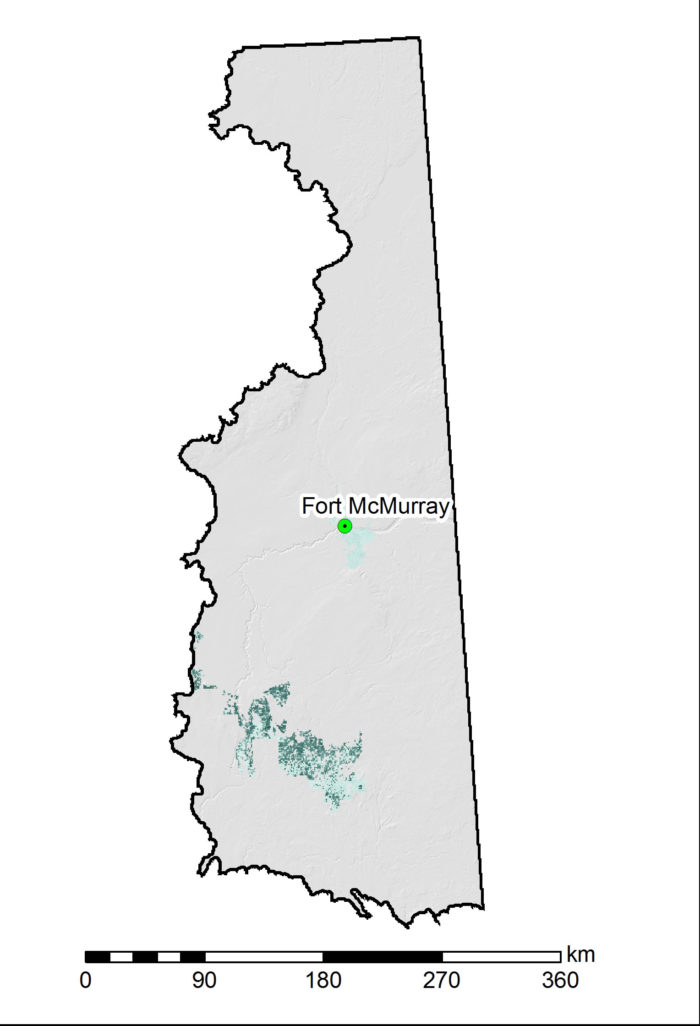 This map shows the monetary value generated from a 20-year simulation of forestry, expressed as the net present value. Timber harvest is conducted by mills that have harvest rights in one or more Forest Management Units (FMUs) in Alberta. In the simulation, mills choose harvest locations based on forest age and the estimated cost to transport timber to the mill. Mills process timber into lumber, pulp, or other wood products for sale, and the resulting monetary value is mapped back to the landscape. Therefore, areas on the landscape only show a value if they were harvested during the simulation. 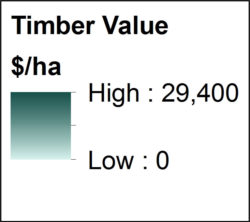